Surrounded by spectacular volcanic mountain chains, Yeha is a town in the central part of Tigari. It is the site of the oldest standing structure in Africa, the Temple of the Moon, dedicated to the great moon god Almougah. It is a sacred place for the Tigrai Orthodox Christians. Yeha is important both archaeologically and religiously.

Yeha is a town in the central part of Tigari. It is the site of the oldest standing structure in Africa, the Temple of the Moon, dedicated to the great moon god Almougah. It is located in a modern town hidden by the Adwa chains of mountains about 53 km to the east of the World Heritage Site of Axum in Tigrai. It is located in a fertile basin with an altitude of 2150 m surrounded by spectacular volcanic mountain chains. It is a sacred place for the Tigrai Orthodox Christians, living memory and religious practices of the same believers since the foundation of the Monastery of Abune Aftsie in the sixth century AD by one of the Nine Saints who came to the Northern Horn from Europe and the Middle East in the same century for evangelization.

The site preserves two complex monumental buildings known as the Grat Be’al Gebri Palace and the Grand Temple of Yeha and two cemetery areas called the rock-cut shaft tombs of Da’ero Mikael and the rock-cut tombs of Abiy Addi dating to the early and middle of the first millennium BC. It also preserves rich intact underground archaeological structures located around these monumental structures and around the tombs mentioned above dating to the same period. 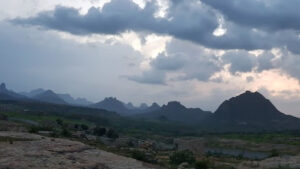 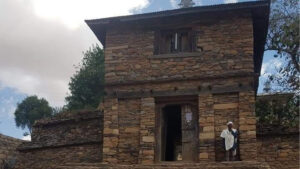 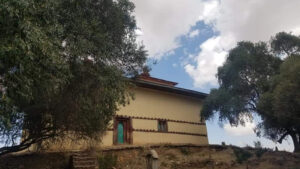 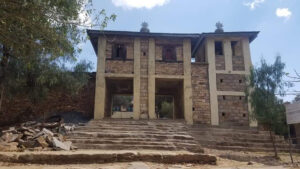 The ancient history of Tigrai can be traced back to around the eighth century BC when some sort of contact, apparently quite close, seems to have been maintained between Axum and South Arabia (Munro-Hay, 1991). Archaeological excavations in many places in Tigrai and Eritrea have unearthed many religious or funerary installations with strong similarities to those in South Arabia, which could be traced back to this Era (Munro-Hay, 1991; Phillipson, 1998). Among such sites, the notable ones are Hawelti-Melazo, about 15 Km south of Axum (de Contenson, 1961), and the temple, related buildings, and tombs at Yeha, about 30 Km northeast of Adwa (Anfray, 1973). In general, some ninety sites have been attributed to this pre-Aksumite period (Fattovich, 1989).

According to Munro-Hay (1991), it seems that the pre-Aksumite society on the Tigrai plateau, centered in the Aksum/Yeha region but extending further north and south had achieved state level during the sixth or fifth century BC (Phillipson, 1998) and that the major entity or state/kingdom came to be called D`MT (Da’amat). The ruins of the temple and the related buildings and graves at Yeha are considered to be the shreds of evidence of this kingdom.

The selection of the Yeha site has been attributed by many to the exceptional fertility of the soils in the broad valleys and the good preservation of the Temple to the subsequent conversion of the latter to a Christian church (e.g. Phillipson, 1998). Results of a geological investigation of the Yeha site and the Temple, however, indicate that the selection is rather related to the strategic importance of the site rather than the broadness or exceptional fertility of the site.

The earliest occupation at Yeha dates to the first millennium BC, with a Great Temple, a “palace” (perhaps an elite residence) at Grat Be’al Gebri, and the cemetery at Daro Mikael with shaft-tombs.

Three artifacts scattered probably representing residential settlements have been identified within a few kilometers of the main site.

The Temple of Yeha is located some 30 km northeast of the town of Adwa, accessed by an all-weather dirt road that branches from the main Adigrat-Adwa road and heads north for about 5 km. Though Yeha is famous for the remarkable monument known as the Temple of the Moon, there are other remains of archaeological importance located in proximity to the site of the Temple.

Archaeological investigations by the Deutsche Axum-Expedition in 1906 and later by Francis Anfray in the early 1970s in a locality called Grat Beal Gebri, located some 200 m northeast of the site of the Temple, unearthed a series of massive square-sectioned monolithic pillars which, due to lack of appropriate conservation after their excavation, are now badly deteriorated (Phillipson, 1998). Francis Anfray also unearthed a series of rock-cut graves, one of which may have belonged to one of the D’MT rulers (Fattovich, 1990), on the lower southwestern slopes of the outcrop on which the Temple stands. Vertical shafts lead to one or more tomb chambers, the contents of which included abundant pottery, copper-alloy sickles and other tools, and an alabaster vessel (Phillipson, 1998).

The Da’ero Mikael rock tombs that cover an area of 250 m² are located about 300 m to the southeast of the Great Temple near the Valley of Shillanat excavated by Francis Anfray in the 1960s and 1970s. Seventeen series of rock-cut graves dating to the first millennium BC that may have belonged to the rulers who probably lived at the palace of Grat Bea’l Gebri were excavated (Fattovich, 1990). These vertical shafts lead to one or more tomb chambers. The grave contents of these tombs included abundant pottery, copper-alloy sickles, zoomorphic seals, other tools, and an alabaster vessel that witness the artistic and technological sophistication of the time.

The other rock-cut tombs of Yeha are found at the foothill of Abiy Addi across the valley of Shillanat to the southwest of the Grand Temple. Nine rock-cut tombs were partly observed located next to each other in various orientations in an area of 500 m². They were cut into the rock up to two to three meters deep. A rectangular shaft of 2 x 0, 6 m leads to one or two sub-rectangular chambers with different sizes of up to 0.9 m in height and 2–3.8 m in length where collective burials took place, most probably successively over a long period during the first millennium BC.

The above archaeological evidence shows that the site of Yeha has outstanding universal values that merit inclusion to the World Heritage List. It testifies the earliest evidence for the emergence of complex culture in the Northern Horn in particular and in sub-Saharan Africa in general. This testimony is traceable in the construction techniques and designs of the Palace of Grat Be’al Geubri and the Grand Temple and religion and cultural practices, artistic handicrafts, and inscriptions. The site of Yeha was also a political, religious, and cultural Centre of highly centralized complex societies that flourished at Yeha in the early first millennium BC in what is now the Northern Horn (Tigray and Eritrean). It was also the first capital city of the Tigrai kingdoms before its transfer to Aksum.