The `royal throne of the kings of Zion, mother of all lands, pride of the entire universe, the jewel of kings’, as many books call it, the earliest Christian kingdom in the world, home to the 'Lost' Ark of the Covenant, the only African kingdom to create it’s own language and calendar, Axum was considered one of the four most powerful world kingdoms, alongside Persia, China and Rome. It manufactured glass, minted coins, from its port at Adulis, exported myrrh, frankincense, gold dust, ivory, and other valuable treasures as far as India.

Home to the earliest Christian Kingdom in the world, home to the (Lost) Ark of the Covenant, home to the only African kingdom to create its own language and Alphanumeric system called Geez (that made the present-day Ethiopian and Eritrean languages and Education system), the first African capital next to Yeha, the first city in Tigrai to be declared a World Heritage Site by UNESCO, seat to the last of the great civilizations,… yes, that’s Axum (also spelled as Aksum).

Many books call the city the royal throne of the kings of Zion, mother of all lands, pride of the entire universe, the jewel of kings’ (Levine 1974: 111). 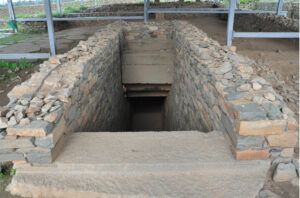 The cathedral of Maryam Tseyon, or Mary of Zion, called Gabaza Aksum, was the holiest place in the entire African Christian kingdom, and still houses the world’s most sacred artifact the Ark of the Covenant, supposedly brought from Jerusalem by the first emperor, Menelik. Tradition says that he was the son of King Solomon of Israel and the queen of Sheba conceived during the queen’s famous visit to Jerusalem. Although no information survives in the legends about the ancient Aksumite rulers who really built the palaces and erected the giant stone obelisks or stelae which still stand in several places around the town, these monuments are locally attributed in many instances to Menelik or to Makeda, the queen of Sheba or Queen of Azab (the South). 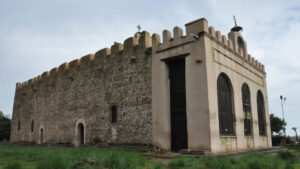 Chapel of the Ark of the Covenant

The history of the Axumite Empire dates back to the 1st to the 13th century, founded perhaps 500 years after the downfall of Yeha, together with its Red Sea port, Adulis, which were abandoned suddenly – probably in the sixth century AD as the result of reasons still not known to historians (some say, an invasion from Arabia), and, much more is known about the historic highland city of Axum. Protected by the mountains of northern Tigray, Axum survived and kept on having a big influence on the imaginations and spiritual lives of many Tigrian, Eritreans, and Ethiopians.

Axum is where Christianity arrived in the fourth century and it is the holiest city of the Orthodox faith. It is also a delight to archaeologists, with ruins of ancient tombs, stelae, palaces, and churches seen everywhere. Amazingly, 98 percent of the ancient city remains to be excavated. For all this, historical and religious richness, the city of Axum has been declared a World Heritage Site by UNESCO.

Here is how UNESCO describes Axum

The ruins of the ancient city of Aksum are found close to Ethiopia’s northern border. They mark the location of the heart of ancient Ethiopia when the Kingdom of Aksum was the most powerful state between the Eastern Roman Empire and Persia. The massive ruins, dating from between the 1st and the 13th century A.D., include monolithic obelisks, giant stelae, royal tombs, and the ruins of ancient castles. Long after its political decline in the 10th century, Ethiopian emperors continued to be crowned in Aksum. http://whc.unesco.org/en/list/15

“Of all the important ancient civilizations of the past, that of the ancient Ethiopian kingdom of Aksum still remains perhaps the least known.” Says Stuart Munro-Hay in his book “Aksum – An African Civilisation of Late Antiquity.” 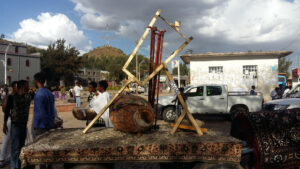 Now it’s time for you to discover the undiscovered and tell the untold. The Aksumite state bordered one of the ancient world’s great arteries of commerce, the Red Sea, and through its port of Adulis Aksum participated actively in contemporary events. Its links with other countries, whether through military campaigns, trading enterprise, or cultural and ideological exchange, made Aksum part and parcel of the international community of the time, peripheral perhaps from the Romano-centric point-of-view, but directly involved with the nations of the southern and eastern spheres, both within the Roman empire and beyond. Aksum’s position in the international trade and diplomatic activity which connected the Roman provinces around the Mediterranean via the Red Sea with South Arabia, Persia, India, Sri Lanka, and even China, tied it too firmly into the network of commerce.

What to visit in Axum