After climbing up a tiresome 60 meters by a swinging old ox skin rope and hiking 94 staircases more, what you see up the monastery is really rewarding. Here comes a real challenge both for your faith and physical strength. If you just happen to Debre Damo, for a visit or annual fest celebration, then you have to face the inevitable. You have to climb 24 meters up a steep cliff.

Debre Damo monastery is situated on an isolated mountain in the central part of Tigray. It is unique compared with most African monasteries. It was built, in the sixth century AD, with carved wood panels, painted ceilings, and walls dedicated to the legend of Saint (Abune) Aregawi.

This historical monastery is founded by Abba ZeMichael, the son of Constantinople king Issac and Queen Edna, in the 6th century. Abba ZeMichael was one of the Nine Saints who came from Syria to Tigrai to preach Christianity. The other 8 saints call him Aregawi in Geez language, which means ‘The Elder’ because he was too wise in his childhood.

Before he founded this monastery he searched other places in Tigrai. But the Angel of God revealed to him as the pillar of light at the Damo Mountain. He became amazed when he saw the mountain and asked himself how could I live there? It’s an isolated mountain, no neighborhood, no water, no other accessible materials for life. It was even impossible to climb. And he started visiting the surrounding.  God, then, in his mercy sent his Angel to take up Abune Aregawi.

The helper Angel St. Michael ordered the serpent, which was 60m in length, to take Abune Aregawi up the mountain with appearing his fire sword.  As it’s said that those who believe in the Lord shall take up serpents and if they drink deadly things it shall not harm them. God does not leave his own saints. Abune Aregawi, therefore, saw the light tent and hears the voice of Angles.

Since then people have been using thick ropes made of animal skins. There are two types of pulling ropes. The first one is used for transporting different kinds of materials, such as foodstuffs, animals, dead bodies, books, holy artifacts, candles, etc. The second one is totally different from the first one and is solely used for pulling people up.  People familiar with the story of Abune Aregawi call it ‘serpent’ and is prepared from five oxen skins. It’s impossible to hold this rope with one hand. It’s very thick and should be firmly held with both hands. It’s tied around the waist for safety reasons. There are some grooves for landing your feet on the rocky hill. People climbing up using this rope have to go straight 60 meters up. For weak and inexperienced hikers, due to its tiresome nature, most people, especially new hikers are initially pulled up by a monk from atop the rope the first 15 meters and take by themselves the rest 45 meters after a landing break in the middle. When finished with the hiking, people have to walk on 94 more staircases with their confidence left.

Once you arrive at the top of the monastery, you will be on a 1000 meters by 400 meters plateau a little bit closer to the sky. The first church that comes into your sight is the church of St. Marry. Surrounded by stones and trees, its overall appearance speaks a lot about its anciently. Many of its parts are made of stones, lumbers, and other old-style construction materials. When you get closer, its doors, pillars, and paints witness its building civilization and history. Gedle Abune Aregawi described that the building of the church took two solid years. At the opening ceremony of the church, St. Yared the hymen was honorably attended and gave the praise of God.

Next, you will find another old church built in the name of Abune Aregawi. This church was built by his successor Abba Mathias. He was a disciple of Abune Aregawi. He saw when Abune Aregawi disappears as Henok and Nebyu Elijah into heaven at the age of 99 on the 25th of October (Tikimti 14) right at the place where his memorial church is built. In these two churches, the holly mass takes place on the seasons of Great Lent and Fast of St. Marry every day. Moreover, the holy mass also takes place every month on the day of St. Marry, 21, and the day of Abune Aregawi, 14, and every Sunday.

It was in this oldest standing witness of ancient monasteries that the first doctrine of the monks’ system was practiced and later spread into the other parts of the country. Today, there are more than 80 men monks. There are more than 200 houses built of stones at the top of the monastery used for residence, catering, and other services. There is also a ground plus one store and logistics and 150 natural springs and water tanks. There is also holy water that springs out from the basement (root) of St. Marry Church in which miraculously many patients get healing from their problems. There is also a cemetery for the saints and monks. It gives you a real natural and spiritual satisfaction to observe the greenery plateau of Abune Aregawi and its mountainous surroundings.

The monastery of Abune Aregawi has played a significant role in preserving priceless scripts and articles in addition to its spiritual service to the believers. It has been also a point of interest for tourists who enjoy trekking and historic artifacts.

The monastery is known for its collection of manuscripts and having the earliest existing church building in Africa still in its original style.

The beams and ceiling of the ancient Debre Damo church – around which the monastery is built – are beautifully decorated with carved wooden panels depicting lions, elephants, rhinoceros, snakes, gazelle, antelope, giraffe, and camels. A large number of paintings are preserved there, including several depicting Abba Aragawi’s legendary foundation of Debre Damo.

Debre Damo is magnificent in terms of its location and an extensive collection of priceless manuscripts that have remained intact until today. It has become a prominent monastic and educational center for the Tigrian, Ethiopian, and Eritrean Orthodox Tewahedo Churches. Many books have been written there and distributed to churches throughout Tigrai, Ethiopia, and Eritrea. 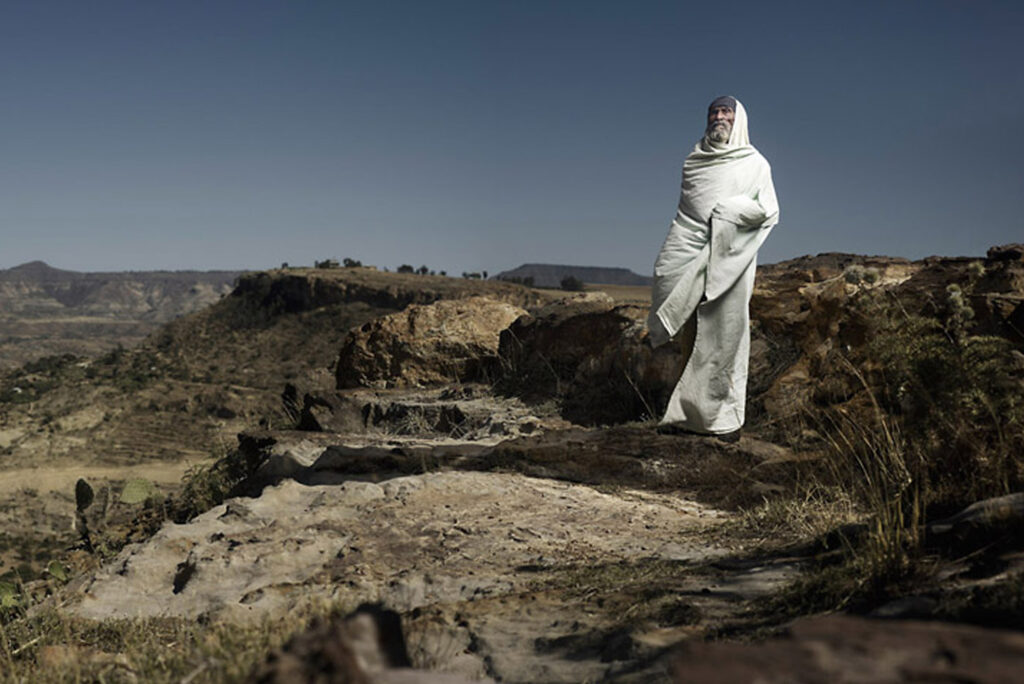 Debre Damo is only accessible to men and male animals. Women and even female animals are forbidden to set a foot into the monastery and must remain under the cliffs and pray from there.

The feast of Saint (Abune) Aregawi is celebrated on October 14 Geez calendar (October 24 Gregorian calendar) which culminates in a pilgrimage to Debre Damo from all over the world.