The monastery is the home of world’s earliest illustrated ancient manuscripts known as ‘Garima Gospels’ which is written & named after the saint himself and its treasury. Carbon dating techniques place the Garima Gospels between 330 & 650 AD.

Abba Garima Monastery is an Ethiopian Orthodox church, located around five kilometres east of Adwa, Tigray. It was established in the sixth century by one of the Nine Saints, Abba Garima, and built by King Gebre Meskel. The monastery became known for its early manuscript copy of the gospels and its treasury. 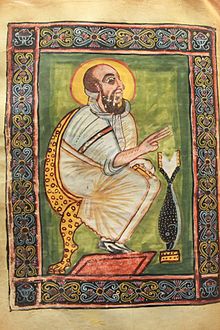 Sixth century portrait illumination of Mark from Gärima 2, likely the earlier of the two Gärima Gospels

The namesake of the monastery, Abba Garima is believed to have been a Byzantine royal with healing powers who was summoned to Axum by Abba Pantaleon. King Gebre Meskel built for him a monastery near Adwa, where he lived for some 20 years performing miracles and healing the sick. Above the monastery on a hill is a spring where Abba Garima is said to have spat on the spot and started a life form.

The monastery was attacked twice during its history, once by Queen Gudit in the 10th century and a second time in the 1530s by Imam Ahmad Gragn, a Moslem who attacked the monastery with his Turkish muskets.

The first European recorded to have visited the monastery in modern times was Henry Salt, who visited it on 14 September 1805. He was told at the time that the building had been built by Gabra Masqal in 560.

In around 1872 or 1873, Emperor Tekle Giyorgis II of Ethiopia was blinded, and imprisoned with his brother and mother at the Abba Garima Monastery, where he died or was executed some years later.

In 1896, the monastery proved an important location during the Italian invasion when Menelik II spotted the advancing troops from the monastery, which contributed to his decisive victory over the Italians. The following year, Ras Alula died at Abba Garima after being wounded in a battle with his old rival, Ras Hagos of Hamasien. His tomb is located at the rear of the main church.

Beatrice Playne visited the monastery around 1950, and in found that the church had burned down twenty years prior and had been rebuilt before her arrival. Nevertheless, she was shown a number of prized possessions which were centuries old, including a number of illuminated manuscripts “whose ornamental headings struck me as Syrian in style.” The last treasured item he was shown was “an ancient spring which, they said, had never failed since the beginning of the world.”

The family of the fifth Patriarch of the Ethiopian Orthodox Church, Patriarch Abune Paulos was long associated with the Abune Garima monastery, and it is at this monastery that the Patriarch first took monastic vows as Abba Gebre Medhin.

The monastery is surrounded by rugged cliffs which are covered with cactus and shrubs. The roofs of the monastery are painted green, and the window frames and doors are painted green, red and yellow. The monastery consists of three churches, about fifteen square and circular cells in which the monks live and a notable treasury. The entrance to the treasury is a stone portal with steps and inside the round building is a glass cabinet as wide as the room. They contain an extensive collection of crowns, helmuts, crosses, chalices and manuscripts and other treasures from the various emperors and religious figures of Ethiopia dating back to the monastery’s founder, Gabra Masqal whose silver cross with gold inlays remains, as does the crown of Zara Yaqob (1399–1468). There are also other items such as a pair of cow horns embedded in the wall, and leather bible satchels for the monks to preach in nearby villages.

The library of the monastery is extensive and includes a detailed history of the early history by a priest named Hawi. The most important though are the two illuminated Garima Gospels which have been restored, and are housed in a former chapel for female pilgrims. According to legend, Abbu Garima himself wrote the gospels on thick goat’s vellum in the Ge’ez language and illuminated the opening pages on both volumes. Most biblical scholars had previously proposed that these gospels, though inspired by on Abba Garima’s example, must have been written centuries after his death, probably in the tenth century or later. However recent radiocarbon dating carried out at Oxford University has confirmed a date between AD 390 and AD 570 for Garima 2, likely the earlier of the two gospel books; meaning that it may well be older than Abba Garima himself. If so they are the earliest surviving dated Christian illuminated manuscripts.